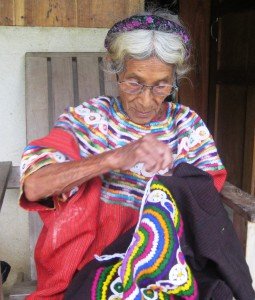 Maria still able to sew, thanks to cataract surgery

When I visited the Ixcan in February, 2013, I was able to check in with a previious cataract patient.  Maria Ambrosio had cataract surgery in 2007.  Five years prior to her surgeries, Maria was functionally blind.  “She had to have someone with her all the time,” her son, Tomas, told us, “for eating, getting to her bed, and going to the latrine.  To ‘see’ she had to touch everything.”

When I saw her in 2008 I asked how her cataract surgery had helped her, Maria proudly told her son in her native language, K’iche (key-chay),   “Well, I can see that tree on the other side of the football [soccer] field.”  But, that’s not all.  According to Tomas his mother was not only sewing and weaving, but she makes clay pots for cooking and storage.  “She’s now able to dig the clay and mold it into pots.”  Tomas had walked with Maria to the health post to get some reading glasses.  He said, “She walked the whole way (about a mile on a hilly gravel road) and only had to help her on 2 of the steepest hills, where the gravel was loose and slippery.”

Maria starts the walk home with her son, Tomas

The next morning (in 2008) I paid a visit at Maria’s home.  She was in the kitchen breaking dried kernels off corn cobs.  They would become tomorrow’s tortillas, which Maria can make once again for her son and his family.  Later I watched as she stitched more colorful thread onto here current sewing project, and witnessed some of her renewed independence as she walked around the yard, able to see the flowers and trees, and the rocks and ruts in the path.

After all these years I expected that Maria had passed away, but when I visited Tomas in February, I learned that Maira is, indeed, alive and well, living with her daughter in another part of Guatemala.  She is now 93 years old and getting a little unsteady, but still able to move around on her own.  She still makes tortillas and sews.  Tomas said, “My mother tells me everytime I see her, how thankful she is that Enfoque Ixcan arranged for her to have cataract surgeries.”  “Without them I wouldn’t be here today,” she tells him.