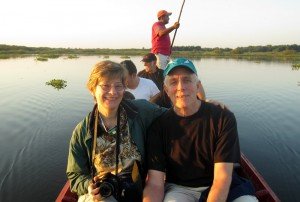 Joene and Scott Pike at Monterrico
We started this trip with R and R by going to a beach called Monterrico on the south coast of Guatemala, on the Pacific Ocean.  We had a great time playing in the waves and bird watching.  We also were able to witness the release of some baby sea turtles.  The baby turtles hatched that morning and scurried to the sea in the late afternoon!

…on the long trek to the sea

…home at last!
Now, the work begins.  We have several meetings with two eye clinics, an optometrist, an attorney and a Rotary Club, before meeting up with the group we travel with to Ixcan.  We’ll leave for Ixcan on Friday, the 15th.  Once there we’ll be doing some training with our eye health promoters, seeing patients and attending more meeting more meetings to map out the future of Enfoque Ixcan.