RIOS MONTT: TRIAL OF THE CENTURY! 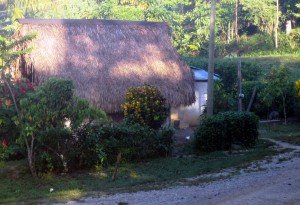 Entire villages were burned to the ground on the orders of Rios Montt. The people, who lived in thousands homes like the one pictured here, fled into the jungle for safety.

“Trial of the century!” That’s what many Guatemalans are calling the genocide trial of former president Efrain Rios Montt, which started March 19th. After over 10 years of pre-trial work, the case in now before the judges. In the early 1980’s when Rios Montt was in power, hundreds of massacres took place in northern Guatemala in a “scorched earth” policy attempt to flush out and kill the guerrilla forces.

In the Ixcán region alone there were nearly 300 massacres. Entire villages were burned to the ground and the people, who lived in thousands homes like the one pictured here, fled into the jungle for safety. Most were unable to safely return to their homes for 10-12 years.

Because of the history of impunity common in Guatemala it is difficult for trials, such as this one, to get to court. In fact, Rios Montt’s trial was delayed because when he was a member of the Guatemalan Congress he was immune from prosecution. If you would like to follow the trial and see updates on its progress, here are some helpful sites.