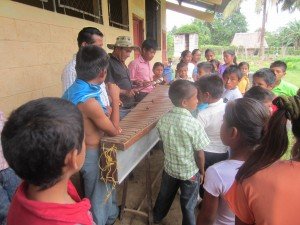 Marimbas around the Ixcan are being played in celebration of the Ríos Montt trial verdict
Rios Montt, now 86 years old, was found guilty of masterminding and overseeing the massacre of 1,771 Ixil Mayans in the department of El Quiche, as well as the forced displacement of 29,000, and 1,485 acts of sexual violence and acts of torture. He was sentenced to 80 years in prison.
During a one hour statement, Judge Barrios recounted evidence of the indiscriminate massacres committed against the civilian Ixil population, systematic physical and psychological control meant to destroy the social fabric of the Ixil culture. She noted the brutal use of sexual violence. These acts were carried out as state policy and destroyed 5.5% of the Ixil population.
Over the course of the trial, 100 survivors testified in the trial which began on March 19. They were joined by dozens of expert witnesses. In closing arguments yesterday, Benjamin Jeronimo, a survivor and representative of the Association for Justice and Reconciliation, stated: “We are not looking for vengeance; we are looking for a true peace with justice, with respect, with equality, with dignity, that is why we are here.”
Rios Montt was the president of Guatemala in 1982.  His presidency marked the most violent times in Guatemala’s 36 year civil war, which ended in 1996.  From 1996 until January 2012 Rios Montt served in the Guatemalan Congress and in that postition he was immune from prosecution.

The utmost respect and admiration goes out the the Guatemalan survivors of the genocide who braved on-going repression and continued to push for justice against great odds.  Their courage in the peaceful pursuit of justice is a great example for the rest of the world to follow.