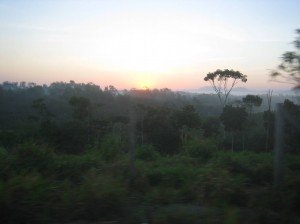 Sunrise in Ixcan, Quiche, Guatemala, where many massacres occurred in the early 1980’s during the presidency of Rios Montt

Former Guatemalan president Rios Montt was convicted and sentenced to 80 years in prison for crimes of genocide against Mayan Guatemalans in the early 1980’s on May 10, 2013. Just 10 days later Guatemala’s Supreme Court overturned the guilty decision and asked for a re-trial.  Many in the Mayan community see this decision as another example of Guatemala’s long history of impunity for those with power;  For years Rios Montt was immune from prosecution when he served as a member of Congress.  When his term, and his immunity, ended in 2012 he was immediately taken to court and charged with genocide and Human Rights violations.  The prosecution presented nearly 100 witnesses in the trial last spring, while the defense produced only a handful of witnesses.

Rios Montt continues to be held under house arrest.  His re-trial may not begin until the spring of 2014, as the court system is very backed-up in Guatemala.  Those on the prosecution side of the issue are comforted by the fact that the Rios Montt case actually reached the courts, after more than a decade of waiting. They see this as the beginning of a hole forming in the wall of impunity which runs rampant in Guatemala.  The re-trial will be costly for the many witnesses who must travel to Guatemala City from their rural communities to testify.  However, for the sake of seeing justice done, they will turn out in large numbers when the trial re-starts.