A Tale of Two Women…the rest of the story

Here are photos of two young women from Ixcán, Guatemala. The woman on the left had no access to eye care. She lived for 7 years with a badly damaged and infected eye. She and her parents sought care. They went to a doctor who gave her some eye drops, which didn’t immediately help her eye.

Having little knowledge of health care, she used the drops until they were gone. Still no improvement. A year later they traveled to another doctor who told them there was nothing that could be done for her eye. In other words, “live with it, it can’t be fixed.”

Poverty and lack of access to eye care and eye care knowledge, kept her and her parents from seeking a second opinion, even as her eye grew more infected and enlarged. She suffered physically, emotionally and psychologically. She hid herself away. She suffered.

The young woman on the right found access to eye care through Enfoque Ixcán. She is the same woman! After seven years of suffering, our eye health promoter, Felipe, found her selling vegetables on the street corner. He convinced her to come in for an eye exam. 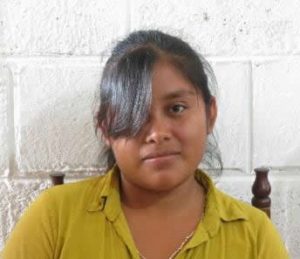 We determined that her right eye was like a time bomb waiting to go off. Her sight was long gone in that eye. And, this progressing infection was dangerously close to her brain.

We sent her for care at our Guatemalan referral resource, Visualiza, www.visualiza.org.gt . Immediately after the doctors did an ultra-sound exam of the eye to get a better look at what was going on inside, she was sent to the operating room. Her eye was surgically removed and a couple of months later (July 2017) she was fitted with a prosthetic eye.

Just look at the difference this surgery made!! 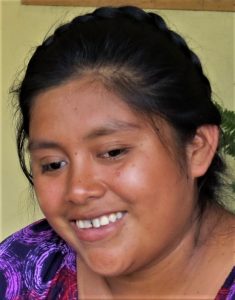 I’ve written about Susana (not her real name) a couple of times this year and in August my wife and I were able to spend some time with her. She is a totally different person than the one we met in February. A new woman, carrying herself with confidence and dignity, reflecting a new self-image, quality of life and personality.

At first we didn’t recognize her. This beautiful young woman was all smiles. The shape of her face had changed. Her eyes had a sparkle. It was an emotional moment to meet the woman who had been suffering for so many years and was now excited to be alive.

Susana was also very thankful. She expressed her, “Gracias a Dios” many times, and expressed her “thanks to all the donors who have helped Enfoque Ixcán bring access to eye care in Ixcán, so that people like her can experience a better life.”

We asked Susana how this had changed her life. She said, “Now when I go out, people smile for me. People say ‘you’ve changed and we’re very happy for you.'”

We are happy, too, Susana!