When Our Bus Became an Ambulance

Joene and I are in Guatemala for our semi-annual training and resupply trip for our eye care project Enfoque Ixcán. We just finished 2 busy days working with our eye health promoters and meeting with health and municipal government officials, and are headed back to Guatemala City. 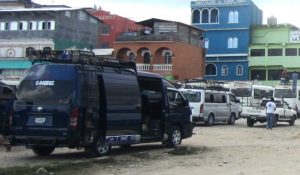 Anyone traveling in Guatemala is familiar with the micro-bus, a regular minivan rigged to seat 20 people. In Ixcán there are hundreds. We were feeling pretty lucky because ours started out with only 10 people. A few stops later we were up to 13.

Then we were hailed down by a man in a yellow shirt. He had a problem. We backed up and crossed the road to a house crowded with people. There was a lot of commotion. Suddenly the ladies in front of us in the van were being moved to the back. Space was being made for an injured person. A 10 year old boy laying on a woven mat and was carefully, but very painfully, placed on the seat in front of us. Five family members boarded with him. His cries were heart wrenching. He had been injured in a fall and it appeared his leg was broken. 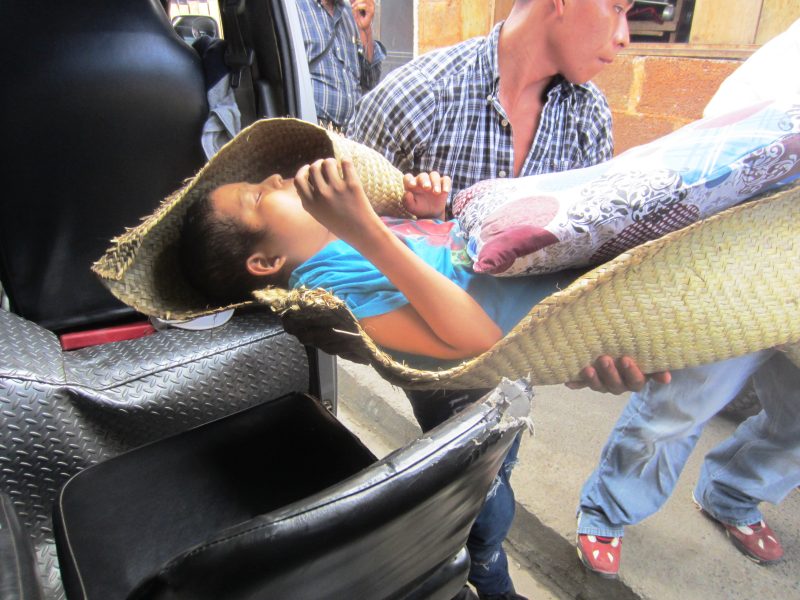 When you live in the remote Ixcán region of Guatemala nothing comes easy. Calling an ambulance was not a option for this family. The option was to stop a passing bus which then becomes an ambulance, of sorts. The bus driver still had to drop riders off at their stops and he made pick-ups when someone showed up on the side of the road with his/her hand out. 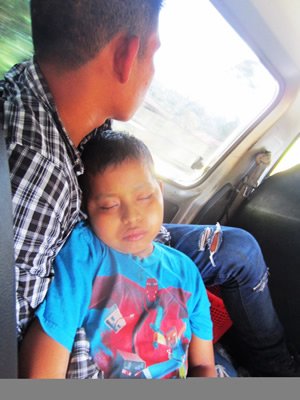 Donaldo and his brother

Our young patient, Donaldo, was a brave one, but his pain was hard to ignore. We gave him a couple baby aspirin and after 30 minutes he had some uncomfortable sleep. All the while he was cradled in his older brother’s lap. It was easy to see they had a strong bond.

In our lives we have so many people to look after us – 911 operators, firemen, EMTs, ambulance drivers, nurses, doctors. In Ixcán there are family and friends, first and foremost. The nearest hospital for Donaldo was 2 long hours away. We stopped twice so he could relieve himself into an empty plastic Coke bottle with the help of his brother. The indignity of it all. He kept crying out through his tears, “Me duele mucho!” (It hurts me so much!). We held his hand, wiped his brow, cried with him and encouraged him to be brave, and he was.

Donaldo reminded me of how fortunate most of us, in the U.S., are to have easy access to health care. He made me wonder how hard and painful it must be as a parent, to watch your child suffer in pain, knowing that this is just the way life is. When opportunity was handed out, you came out on the short end.

I hope Donaldo is resting comfortably tonight. He deserves that.